Skip to content
Home/CBD-Studies/What is the Endocannabinoid System?
Previous Next

What is the Endocannabinoid System?

Only discovered just 40 years ago, doctors and researchers have posited that the endocannabinoid system is a network of endocannabinoids and cannabinoid receptors that exist throughout each of our bodies. So far, with the animals that have been under the microscope have found this to be the case with any mammal, and it is held that this newly discovered internal system is absolutely crucial to our survival. These findings are crucial for those looking to bring their bodies and minds back into balance.

The endocannabinoid system is made up of several integrated mechanisms:

Together, these mechanisms are predominantly responsible for regulating body processes and functions throughout the body systems. Endocannabinoids interact with the CB1 and CB2 receptor sites located within each part of the body with the goal of helping the body achieve homeostasis, or equilibrium

The cannabinoid receptors exist on the surface of cells and “listen” closely to conditions around the body. They communicate this information about our bodies’ status and changing conditions to the inside of the cell, allowing for the appropriate measures to be taken. In other words, these relays allow for us to maintain homeostasis by monitoring what is going on in our bodies.

Scientists have identified in the last seven years two primary cannabinoid receptors, called the CB1 and CB2 receptors (there may be more CB3 and CB4 for example). Although both types of receptor can be found all throughout the body, CB1 receptors are more highly concentrated in the brain and central nervous system, whereas CB2 receptors can be found more abundantly in the immune system, organs, and tissues.

Most of us have by now heard of the cannabinoids found in plants, called phytocannabinoids, but as proof we are more connected with our surroundings as previously thought. Earthing, or getting back to nature has a much deeper meaning and effect on the body than previously thought. The body also produces its own which are referred to as endocannabinoids. These molecules are created whenever we need them, usually in response to some change in the body. Which for most everyone means they are being created continuously as we age. They can bind directly with the cannabinoid receptors – you can think of them as slotting into one another like a jigsaw puzzle or a lock and key.

As of today, scientists have identified two major endocannabinoids, anandamide and 2-AG (2 Arachidonoylglycerol). Endocannabinoids are made from fat-like molecules within cell membranes.

Once the endocannabinoids have fulfilled their usage, metabolic enzymes are able to break them down again. FAAH (Fatty Acid Amide Hydrolase) breaks down anandamide, while MAGL (Monoacylglycerol Lipase) breaks down 2-AG. This ensures that the endocannabinoids are not used for longer than necessary. These two endocannibinoids are created as they are needed, and constant use of them, can lead to desensitization thus once used for the purpose they were created for, the body breaks them down.

This process is what separates endocannabinoids from other molecular signals like hormones or neurotransmitters, which can be stored in the body.

How was the System Discovered?

The EndoCannabinoid System (ECS) is not often highlighted in medical school circles, and with it being such a newer discovery than say the respiratory or cardiovascular systems, is even less heard of in the wider public. One of the reasons that ECS is not more familiar is that it was not identified until fairly recently unlike the other systems of the body. Medically it is relatively understudied and still needs years of experimentation and study to fully realize how the system completely functions.

In 1964, an Israeli scientist named Dr. Raphael Mechoulam was able to identify and isolate THC for the first time. The hallucinogenic compound in the Cannabis species, Marijuana. Once these types of cannabinoids could be isolated, they found more than just THC within the Cannabis species and it paved the way for research into why cannabis has the effects it does on the human body. Which has been stunted because of the stigma of usage of the cannabis genus has had placed upon it.

In 1988, Allyn Howlett and William Devane discovered the first cannabinoid receptor in the brain of a rat. They began to map the CB receptors in the brain and found that there were more of these receptors than any other neurotransmitter receptor. The endocannabinoid system had been discovered and confirmed not to long after to be present in humans as well.

That is why it has this name – it was essentially named after the cannabis plant which helped to lead to its discovery. The newness of the discovery coupled with that stigma, the research studies into this vital bodily system has been quite limited until recently within the last 15 years.

How Does the Endocannabinoid System Affect my Health?

Simply put, if you can achieve homeostasis, or a balance within the Endocannabinoid System the rest of your systems which could be imbalanced or malfunctioning can be brought back to the proper function set originally for it to do.

What is the ECS’ Role in the Body?

As we have talked about, the ECS plays a vital role in maintaining homeostasis. But what exactly does this mean? The following graphic shows how doctors think the Endocannabinoid system interacts and performs. 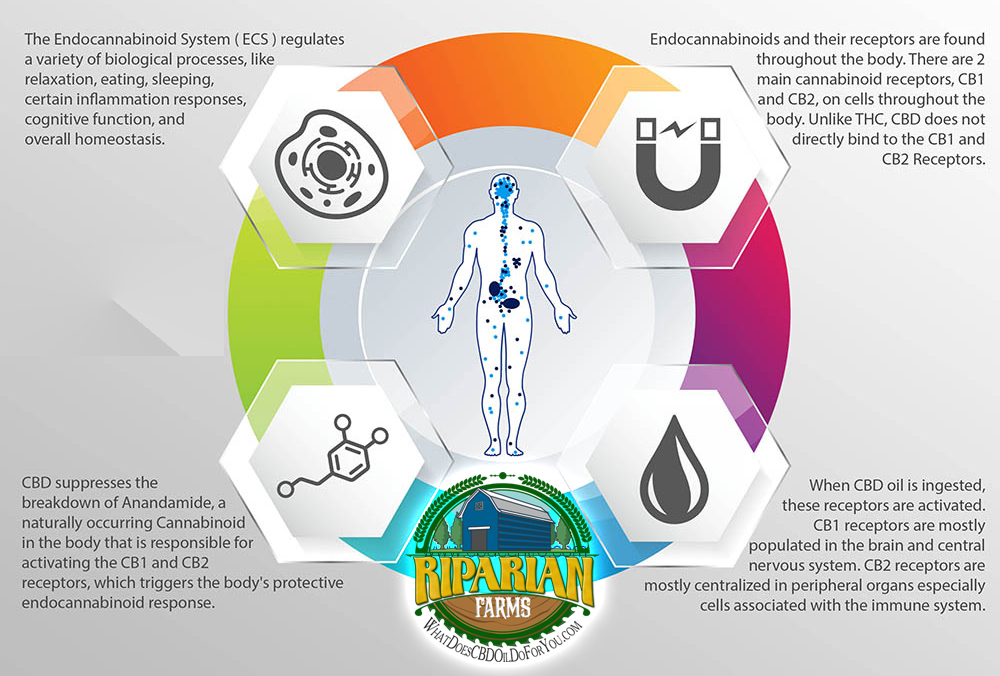 It is hypothesized, and further studies are showing this to be the case, that having a deficiency of endocannabinoids could cause inflammation in the tissues of the body that cascades a wide range of complications in that body. If we find we have insufficient endocannabinoids, we can’t fix certain problems that arise from the physical and chemical changes experienced. This relates to both mental health issues and physical complications.

One of the major functions that the ECS is thought to control is inflammation. Inflammation is our natural response to pain and damage to our body, as it can protect the targeted area from further harm. It also helps to remove pathogens and damaged tissue. Inflammation is produced by fluid and immune cells moving to the affected area in the attempt to put our body back into balance or what it considers its balanced state.

However, our inflammation response isn’t perfect. If inflammation spreads further than the damaged area or if it persists longer than needed, it causes further problems than the original injury. There are even conditions related to this, such as chronic inflammation and auto-immune diseases. This is why we need the endocannabinoid system, which have shown that helps to suppress or limit the immune system’s inflammatory signals.

The ECS doesn’t stop here, of course. Anything you can think of that homeostasis helps to regulate, the ECS will be involved in. As you can see, this makes it an incredibly crucial system that deserves extensive further study and understanding.

How Do Cannabinoids Interact with the ECS?

Take a moment and soak in all that information in that you just learned about. Such knowledge can help you in your future decisions on your health and the steps you take to get back to “Normal”. Where in your life and how can this knowledge help you out in what aspect of your life? Wait, there is yet more to learn!

With all this information on the endocannabinoid system, it’s logical to jump straight to wondering how plant cannabinoids interact with our ECS. Of course, with over 100 cannabinoids naturally occurring in the cannabis plant, each one can interact with our ECS in different ways. THC and CBD are the most well-known and most well-studied, though, having garnered the most public interest.

Because each of us are made up differently, the usage of phytocannabinoids is an individual experience. There are some general guidelines that rings true for most who have used CBD in all it’s forms, but your particular experience can differ from everyone else. That is why we provide you with all the knowledge that is now available (and seek to update on a regular basis) for your benefit.

For example, Tetrahydrocannabinol, or THC, is the most infamous active compound in cannabis, and it has the ability to interact directly with our endocannabinoid system. When marijuana is consumed, (and how it is consumed can vary your experience with it too) the THC can bind directly with our cannabinoid receptors, in the same way as our endocannabinoids do. THC seems to have a preference for our CB1 receptors, found in the brain, which is why THC can cause psychoactive, intoxicating effects and produce the famous ‘high’.

But what about CBD? Cannabidiol is slightly different; instead of binding directly with our cannabinoid receptors, it has an indirect influence on the ECS. It can help us to produce more endocannabinoids naturally, which in turn leads to a better functioning of the ECS and a healthier body overall. Complete homeostasis. This is why CBD is being investigated for its potentially therapeutic properties. 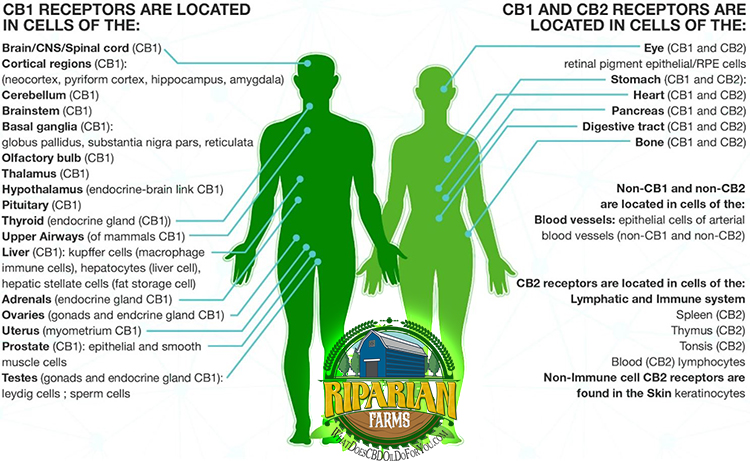 Basically, when you take CBD oil or another CBD product, you are absorbing CBD into your bloodstream and allowing it to interact with the ECS. If your endocannabinoid system is struggling to keep up with homeostasis, CBD can give it that much needed boost.

The endocannabinoid system is a very important system in the human body. It is not only crucial to our survival, but it is also fundamental in understanding what impact taking CBD could have on our bodies.

As you can see, the existence of the ECS is very encouraging for the CBD industry, as it shows why CBD can have such a positive effect on people.

If you have ever heard of the endocannabinoid system and felt a little lost, we hope that this article has served to explain everything you need to know about the ECS and its function.